“What happens when journalism is everywhere?”, Mathew Ingram asked in 2011. Nine years and one Trump term later, the answer is here. A chapter from “Postjournalism and the death of newspapers” (2020). 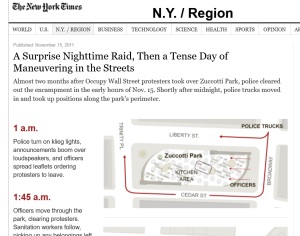 On November 15, 2011, soon after midnight, the New York riot police started a raid to evict the Occupy Wall Street protesters from their camp in Zuccotti Park, Lower Manhattan. Two hundred protesters were arrested, six journalists among them, including two journalists of the Associated Press (AP). They tweeted the news about their arrest. The event had widespread resonance, both in politics (some compared the police raid in Zuccotti Park to the events at Tiananmen Square[1]) and in the media industry[2]. Many outlets and media associations, such as the PEN center, for example, “condemned restrictions on press coverage of police crackdowns” and called the arrests of journalists “an obvious abridgement of the First Amendment.”[3]

The next day, AP employees received an email that contained the following, as quoted in New York Magazine:

In relation to AP staff being taken into custody at the Occupy Wall Street story, we’ve had a breakdown in staff sticking to policies around social media and everyone needs to get with their folks now to tell them to knock it off. We have had staff tweet — BEFORE THE MATERIAL WAS ON THE WIRE — that staff were arrested. (Highlighted in NYMag.) [4]

New York Magazine wrote that in AP, “The official rules note, ‘Don’t break news that we haven’t published, no matter the format.’ (Reuters spells out the same idea plainly in their handbook: ‘Don’t scoop the wire.’).”[5]

As Hollywood Reporter put it, “The Associated Press was not happy about being scooped on Twitter by its own employees.”[6]

The case was widely discussed by media critics. It revealed that journalists must supply news not to the public, but to their outlets. On the background: Twitter happened to be a faster and better tool for covering hot events than even a newswire. The news org had to remind its staffers that they owed news to it, not to Twitter.

The AP representative and the sender of that email, Lou Ferrara, after watching all the nasty commentaries on Twitter, later explained that the first reason why AP staffers should not tweet out news before it got on an AP platform was that ‘we put news on our products first. That’s what our customers expect.’[7] The second reason was personnel-safety concerns. 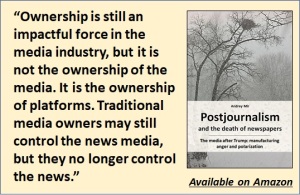 This was not an isolated case. All the major media have guidelines, in essence, restricting the rights of their staffers in using social media. “If you have a piece of information, a photo or a video that is compelling, exclusive and/or urgent enough to be considered breaking news, you should file it to the wire, and photo and video points before you consider putting it out on social media,” the AP policy reads[8]. The main reason for such restrictions is, of course, to not give away value that constitutes media business.

The case unveiled a fundamental contradiction in principles. Journalism is meant to inform people to make them citizens. It is a core institution that has enabled the development of the Habermassian public sphere. But the institution needs to be maintained. Its public service was paid for either through news retail or through delivery of advertising. It had not been a problem in the past, if noticed at all. Society agreed to use the public service supplied by business. The public outsourced this service to the media business. But then it was suddenly revealed that the news business actually wants to keep the news for itself, even when the news can bypass it.

When the internet allowed news and ads to bypass traditional media, the institution maintenance fee traditionally collected by the media became intolerable for readers and advertisers. Intermediaries have become redundant in many cases, as the consumer increasingly gets along without outsourcing this function. The formerly supplier’s market has turned to the market of the consumer. The most terrible thing was that the consumers became the prosumers.

Under these conditions, media orgs came up with ideas to support and preserve their once-walled garden with some artificial restrictive measures. There was the idea, for example, to license journalists in order to distinguish them from bloggers. A legislative initiative in Canada even proposed to “identify those journalists who were dedicated to ‘serving the public interest,’ and anyone with the professional rank would enjoy certain privileges such as ‘better access to government sources.’”[9]

The prohibition on journalists posting the news before supplying it to the wire stems from the same logic. The media try to restore their walled garden by building walls for all who acquired the ability to handle information on their own. If everyone around is hedged in, then yes, you get your fence, too.

Watchdogs of democracy prefer to keep their watch in the paywalled garden. But maintaining these conditions artificially is impossible.

The way an instrument is used is under the control of the instrument’s owner. But the issue is not even that AP is unable to control Twitter as a better instrument of news delivery. The issue is that this is not an instrumental case at all. This is a new environment in which a media instrument is given to everybody and therefore turned into an environmental force controlled by no one.

It was no coincidence that the ability of the new media environment to challenge, replace and obsolesce old media became apparent at the beginning of the 2010s, when the Arab Spring and the Occupy Wall Street movement rode the first wave of social media proliferation.

“If Twitter is beating your news wire, you have bigger problems”, wrote Mathew Ingram, one of the leading media analysts, in 2011, in “Memo to AP: Twitter is the newswire now.”[10]

The title of his next column posed the chief question of that time: “What happens when journalism is everywhere?”[11] He wrote:

When the Arab Spring demonstrations were under way in Egypt’s Tahrir Square and reports were streaming out through Twitter and Facebook and text messages and cellphone videos, it was easy to feel superior to the Egyptian government. How could they not realize that information can no longer be contained by blockades or even internet blackouts when everyone has the power to publish? Now the authorities in New York City and elsewhere have been getting a dose of that medicine, with the “Occupy Wall Street” protests being tweeted and live-streamed in real time. As the Associated Press learned this week to its chagrin, we all have newswires at our disposal now.[12]

In 2011, the tone of such revelations sounded alarming but also rather cheerful. What was noticed at the time seemed to threaten the established authorities, but they always deserve to be threatened. As for the media, it was assumed that they should have somehow adjusted to the new challenge.

Nine years and one Trump term later, the tone is different. It is obvious that the new environment threatens the entire established order, including the media, because they are established institutions, too. A challenge has turned into an existential threat.

The new media environment does not conflict with the firstborn media. It has simply appropriated their content and deprived them of their business. It has exposed that old media supplied news not to the public but to the wire. At a deeper level, it has been revealed that journalism thrived not on information but on the absence of information.

Over its entire history, journalism managed to induce unsatisfied demand for information that the audience otherwise would never have even experienced. As Gilbert Keith Chesterton’s old joke goes, “Journalism largely consists of saying ‘Lord Jones is dead’ to people who never knew that Lord Jones was alive.”

The limitation of access to the means of publishing was the crucial factor that environmentally and fundamentally secured the privilege and exclusiveness of journalist status – before any reasoning about journalism quality or social service could even have been taken into account. The lack of access to producing and consuming information, not the information supplied itself, was the core ingredient of the successful media business. 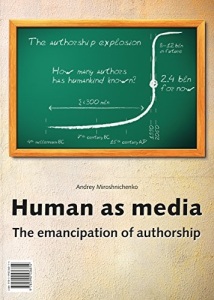 The emancipation of authorship by the internet (Miroshnichenko, 2014) and particularly by social media removed this limitation. Journalism has simply lost the publishing monopoly. It has become clear that it is not the quality of content, nor the social function, but the technological monopoly over content communication that was at the core of the media’s existence.

Any attempts to restore this monopoly will obviously fail, as no one can put the toothpaste back in the tube.

Moreover, there is nothing in this environmental change that the media would have been able to fix or prevent. The mass media can decorate and enhance their product however they like but it will be to no avail because their chief issue is on the side of consumption, not production. This now has to do with how news is received, not how it is produced. The media have no control over this whatsoever.

No restrictions on others to express themselves will succeed, as free authorship is the fundamental principle of the post-industrial form of capitalism – the more technologically advanced ‘platform capitalism’, which is aimed at extracting attention from those given access to instant self-actualization. This is the value of the highest Maslow’s rank of needs, and, therefore, it has brought into being the supply-demand relations of the next level, which are inaccessible to old media with their model of industrial broadcasting.

The attempts to secure a paywalled garden for subscription, which have been seemingly successful for some of the largest media outlets in the US under the ‘Trump scare’, will inevitably also fail after Trump is gone; either then or after the last newspaper generation is gone.

The fundamental technological framework for journalism is vanishing with its monopoly. For journalism, the advent of the internet is not a challenge, it is an extinction-level event.

[7] Wemple, Erik. (2011, November 16). “Why the Associated Press ordered to ‘Knock it off’ on Twitter.” The Washington Post. http://www.washingtonpost.com/blogs/erik-wemple/post/why-the-associated-press-ordered-staff-to-knock-it-off-on-twitter/2011/11/16/gIQAF1O9RN_blog.html

Like Loading...
‹ Journalism in search of a cute little monkey
Negativity bias takes the lead when news is paid by readers, not advertisers ›

Categories: Decline of newspapers, Emancipation of Authorship, Future of journalism, Human as media book, Media ecology, Postjournalism and the death of newspapers