Home › Future of journalism › Negativity bias takes the lead when news is paid by readers, not advertisers

Bad news plus good crowd makes good engagement. A chapter from “Postjournalism and the death of newspapers” (2020).

Almost 3 million U.S. workers filed for unemployment last week. Although the weekly tally has been declining since late March, experts are warning of a long struggle ahead.

Technically, if one looks at the facts, the teaser says that the weekly index of unemployment has been in decline for more than a month. Which is – again, technically – not such bad news. But good news does not create a feeling that the public wellbeing is in danger. Within the reader-driven business model, a “supportive selling environment” (Herman, 2000, p. 102) needs to be negative. Readers must worry. A fact that is not even neutral but rather positive is nevertheless framed as bad news.

In 1979, economists Daniel Kahneman and Amos Tversky published their seminal work “Prospect Theory: An Analysis of Decision under Risk”. This was a study in cognitive psychology and behavioral economics that shed light on the subliminal evaluation of risks in decision making. (Kahneman won the Nobel Prize in economic sciences in 2002 for their insights into decision making; Tversky died in 1996 – the Prize is not awarded posthumously).

According to Kahneman and Tversky, people are not necessarily rational in their decision making, as was seen in the then-dominant ‘expected utility theory’ (the 1960–70s). Kahneman & Tversky developed an alternative theory of choice, according to which people irrationally weigh the probability of potential losses and potential gains. As they put it, “(T)he value function is defined on deviations from the reference point; generally concave for gains and commonly convex for losses; steeper for losses than for gains” (Kahneman & Tversky, 1979, p. 279). 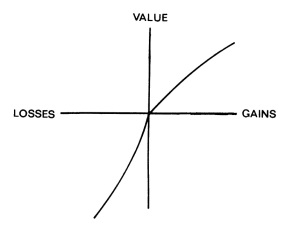 The value function on the scale of gains and losses, according
to the Prospect Theory (Kahneman & Tversky, 1979, p. 279).

This value function illustrates that people would prefer to avoid losses rather than acquire equivalent gains. In other words, it is better not to lose $5 than to find $5. Thus, the human attitude toward potential losses and potential gains is asymmetrical. Losses outweigh gains. The probability of losses impacts decision making (risk taking) more heavily than the same probability of gains. “A salient characteristic of attitudes to changes in welfare is that losses loom larger than gains”, as Kahneman and Tversky put it (1979, p. 279).

For those planning to make a purchase on Amazon, negative reviews are much more insightful and valuable than positive ones. Clay Shirky cited in his Cognitive Surplus an open source aphorism, “Good community plus bad code makes a good project” (Shirky, 2010, p. 144). Indeed, nothing attract or unites people better than bad things.

“Real news is bad news – bad news about somebody, or bad news for somebody,” wrote McLuhan in Understanding Media 15 years before Kahneman & Tversky published their discovery (McLuhan, 1964. p. 222). 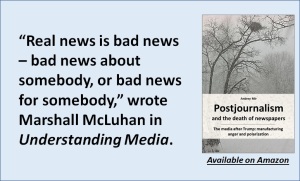 The inclination of people to value negative news more than positive news provides an interesting excuse for the yellow press, tabloids and the like. As journalists often say, they are not responsible for the negativity bias in the media; this is what people want. This is in the nature of humans. Behavioral economics implies that this might be true.

The media subliminally exploit people’s inclination to pay more attention to negative news. “It leads if it bleeds”, as an old reporters’ saying goes. In their pursuit of reader attention, the media are naturally inclined toward negativity. The balancing of this natural predisposition requires some systemic counterweights or some artificial, conscious counter efforts.

Advertising that requires proper content is one of those natural counterweights. Another one is reputational – an editor’s ambition to build a respectable media brand (though the brands of ‘popular’ papers and tabloids can be considered respectable, too, at least in terms of professional performance).

Some people in the media industry try to resist the negativity bias by controlling the forces pushing for negativity and other negative distortions of news reporting.

For example, so-called ‘slow journalism’ confronts the ‘hamsterization of journalism’. The analogy to ‘slow food’ as opposed to ‘fast food’ is used; the idea presumes that one can enjoy food, or journalism, as a high-quality cooked product.

A special professional educational project, the Solutions Journalism Network, was launched in 2012. The project aimed to “train and connect journalists to cover what’s missing in today’s news: how people are responding to problems.” It stated that “We’re working to bring solutions journalism to every newsroom worldwide.”[1]

British magazine Positive News (daily online and print quarterly) focuses on “good journalism about the good things that are happening.” The magazine’s quasi-manifesto declares that,

When much of the media is full of doom and gloom, instead Positive News is the first media organization in the world that is dedicated to quality, independent reporting about what’s going right.
We are pioneers of ‘constructive journalism’ – a new approach in the media, which is about rigorous and relevant journalism that is focused on progress, possibility, and solutions. [2]

Some other attempts to build media projects on ‘constructive journalism’ cause a buzz in the industry from time to time. In 2018, Cornwall Live, a local British news site, “invested in positive news” by launching the Happiness Project with a happiness correspondent.[3] The Better India started as a side-project blog in 2009 but turned into a foundation-funded full-size media outlet with 27 full-time staffers by 2018.[4]

Constructive journalism is journalism with an agenda, and therefore the membership model fits it very well, as both assume that journalism sells impact. People do not buy information; they join a cause.

Positivity in journalism can exist, but only when paid from above, either by advertisers, unknowingly, or by sponsors, deliberately. These are artificial, unnatural conditions for news supply. If news supply is left to be driven by pure news demand, it will lean toward negativity.

In 2014, Russian local news website City Reporter from Rostov-on-Don conducted an experiment. Journalists decided to publish only good news for one day. Even when they got a disturbing tip (such as an alert about a possible bomb at a local railroad station), they reworked it into a solution or positive outcome (a bomb was not confirmed).

According to deputy editor Victoria Nekrasova, “We looked at events, excluded homicides and catastrophes, and put positive headlines. Unfortunately, such news was not popular”. As a result, their website traffic plummeted that day to 30% of its normal level.

Perhaps, with some constructive journalism techniques, they would have performed better. But what the case shows is clear: the mechanically introduced filter of positivity momentarily ruins the traffic. This 70% decline in traffic is an approximate price to pay for being positive in news supply.

The only way to compensate for the natural environmental negativity bias of the media is to proclaim a mission and sell it or to give the newsroom autonomy to an outside payer, such as advertisers, foundations or other sponsors. Otherwise, the natural ‘behavior’ of traffic is just to run away from a deliberately ‘socially constructed’ positive agenda.

[4] Wang, Shan. (2018, March 7). “The Better India will show you all the positive news, on all the channels you might want it.” NiemanLab. https://www.niemanlab.org/2018/03/the-better-india-will-show-you-all-the-positive-news-on-all-the-channels-you-might-want-it/