The hamsterization of journalism and cannibalism of news teasers

The transition from the parceled to the streamed mode of content production had a dramatic impact on the quality of journalism. This change in the technology of production caused newsrooms to switch from fixed deadlines to rolling ones, which, in reality, are no deadlines at all, but rather a constant pressure to supply content as much and as fast as possible.

Simultaneously, the ‘quantization’ of revenue also occurred. As print dollars turned into digital dimes (and then mobile pennies), the media tried to make money from the turnover, not a piece (a parcel). They did not succeed. Instead of money, they ended up chasing traffic, in the hope that traffic would somehow convert into ad revenue. But advertisers migrated to other platforms.

Suffering economically, the media orgs cut jobs. Out of necessity, the remaining staffers have to work more in order to support the content stream simply in an effort to attract impulsive clicks from readers. “We give them three times as many things that are completely unimportant,” as Dean Starkman quoted a Wall Street Journal reporter in 2011. A decade before, the WSJ produced about 22,000 stories per year, “all while doing epic, and shareholder-value-creating, work, like bringing the tobacco industry to heel.” The same number of stories was produced by the Journal in just six months of 2011, and this count did not include “Web-only material, blogs, NewsHub, etc.” [1]

“Do more with less” became the motto of the dwindling newsrooms. Churnalism appeared: media staffers used any raw content to publish something in order to keep up with the speed of the flow.

Quantity replaced quality. Instead of thoroughly elaborated masterpieces, journalists started churning out series of oftentimes meaningless news, such as “Sheriff plans no car purchases in 2011,” as quoted by Dean Starkman, who coined the term ‘hamsterization of journalism’. He wrote that,

The Hamster Wheel isn’t speed; it’s motion for motion’s sake. The Hamster Wheel is volume without thought. It is news panic, a lack of discipline, an inability to say no… But it’s more than just mindless volume. it’s a recalibration of the news calculus…
The Hamster Wheel, then, is investigations you will never see, good work left undone, public service not performed. [2]

Starkman sagaciously noted other consequences of journalism hamsterization. He wrote that, “the Wheel infantilizes reporters, strengthens P.R.”. Indeed, under the condition of production acceleration and rolling deadlines, journalists are forced to use any available hints, pitches and scoops, no matter how empty or un-newsworthy they are. This makes journalists susceptible to any content offers and influences, including those coming from PR-pitches, press-releases and fake news.

However, being a champion of good-old quality journalism, Dean Starkman stated that, “the Wheel is not inevitable.” He thought the disease is curable.

In 2011, he wrote his famous essay “Confidence Game. The limited vision of the news gurus”[3] (which later became a book), in which he sought to protect journalism as a public service from the digital visionaries such as Clay Shirky, Jeff Jarvis, Dan Gillmor, Jay Rosen, and others.

Referring to high ideals of the past, such as Titan-muckraker Ida M. Tarbell, who dared to stand against Standard Oil’s monopoly in 1904 and created, along the way, investigative journalism, Starkman tried to debunk, as he called it, the “future-of-news (FON) consensus” of the digital gurus. He wrote:

With regard to protecting journalism as a public service, Starkman thought the future of journalism is a matter of the prevailing beliefs in the industry. That is why fancy gurus (“a new kind of public intellectual: journalism academics known for neither their journalism nor their scholarship”[4]) must be dethroned and the lofty principles of journalism must be fought for.

However, Starkman’s acute revelation of the hamsterization of journalism proved to be good in terms of diagnosis, but not cure. Yes, the public has a problem. No matter who proclaims what, media evolution will pave its way. Regardless of the names and titles of FON gurus or whatever you call those ‘prophets’ and ‘evangelists’, they did not lead the processes; they registered the occurrence (if they could prove themselves good enough). This is not someone’s evil will that changes the environment. This is an environmental setting that originated from the latest technological improvements, all subjugated to a certain logic of media evolution, that are driving the changes in journalism.

Starkman’s ‘hamsterization of journalism’ was mentioned as one such environmental outcome when the FCC analyzed the threats to journalism. In its 2011 report “The Information Needs of Communities,” the FCC noted that,

…the broader trend is undeniable: there are fewer full-time newspaper reporters today, and those who remain have less time to conduct interviews and in-depth investigations. In some ways, news production today is more high tech… but in other ways it has regressed, with more and more journalists operating like 1930s wire service reporters – or scurrying on what the Columbia Journalism Review calls “the hamster wheel” to produce each day’s quota of increasingly superficial stories.[5]

Starkman’s diagnosis of journalism hamsterization was profoundly environmental. “Journalists will tell you that where once newsroom incentives rewarded more deeply reported stories, now incentives skew toward work that can be turned around quickly and generate a bump in Web traffic,” he wrote.

The ‘FON-gurus’ did not arrange the change in newsroom incentives. Clay Shirky, Jeff Jarvis, Dan Gillmor, and Jay Rosen, along with Dean Starkman himself, are among the most prominent thinkers of the early digital era. Nevertheless it was not they who turned the previously parceled content production into the streamed content production, with the rolling deadlines, and the quantum of media content being reduced to the size of news bits that tend to become news baits.

The morphological unfitness of the journalistic parcellation of content for better flow in the stream also has an economic dimension.

The quantization of content into news bits creates a paradox that is interesting, yet lethal for good-old journalism. An editor seeks to lure readers by making articles’ snippets on social media more attractive and loading them with the most significant information and all the juiciest details from the original articles. Ironically, however, the more attractive the teaser, the more information it carries, thus there is less need for readers to actually follow the link and read the entire article on the media org’s website.

The catch is that, while competing for audiences, news snippets do more than just announce the news; they actually deliver the news. News bits turn into news baits that do not lure readers but rather feed them to satiety.

News teasers of the past were not able to do that, as they did not garner enough flows. Three or four catchy teasers on a print magazine’s cover did not shape the agenda and did not erode readers’ impulse to dive in.

The internet changed this. When recaps, headlines, teasers, announcements, and news baits (accompanied by users’ comments) flood one’s news feed on social media, they are capable of representing the agenda on their own. There is no need for further reading. Being well-cooked news bits, click baits do not evoke clicks when there is a sufficient torrent of them in the flow.

Thus, the side effect of the further quantization of media is cannibalism: the recap devours the original article. Being forced to compete in announcements, the media turn the readers of articles into the readers of recaps.

What this does to media business (or what remains of it) is needless to say. It is impossible to sell announcements; nobody can sell bait to fish.

The quantization of content down to the level of teaser and clickbait on social media dispossesses the media from content they produce even more than was the case on Web 1.0, which delivered separate articles. 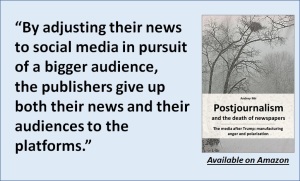 Legacy media have kept doing their job of news compression better than ever before. If we put the business needs of media orgs aside, it should be noted that news-gathering media technologies have improved dramatically. But there is no good news for the media business in this, as media outlets could end up being hostage to social networks. By adjusting their news to the streams flowing on the networks’ platforms in pursuit of a bigger audience, the publishers give up both their news and their audiences to the platforms.

News baits are self-containing bits of media content that, on a statistically significant scale, are capable of feeding everyone’s newsfeeds sufficiently enough to shape the panorama of the day. They provide a free service that the new media environment provides to everyone. But it is also a disservice to the media. The gratuitous giveaway of news bits causes the natural weathering of media content that could otherwise have been used by the media for news retail, as was the case in the past.

Under such conditions, media content cannot be a commodity, purely due to technical reasons, no matter how interesting it is. Any attempts to sell content to those who are already overly supplied with this content in the form of news baits, are doomed. There will be no paywalls paid from below. All paywalls existing today either are dying relics or represent a different business model: the model of surrogate membership.

[1] Starkman, Dean. (2010, September/October). “The Hamster Wheel. Why running as fast as we can is getting us nowhere.” Columbia Journalism Review. https://archives.cjr.org/cover_story/the_hamster_wheel.php?page=all

Like Loading...
‹ How both old and new media polarise society for profit (or survival)
How to live with polarisation ›