Why polarisation is a media effect and what we can do about it.

Populism and polarisation are structurally embedded into this social-economic symbiosis. This media hardware can and must work only with this cultural software. Excerpts from the paper. Full paper: IPPR Progressive Review.

<…> Social media are designed to encourage user engagement. Because of ‘the thirst for response’,[1] which can be thought of as part of the Hegelian ‘struggle for recognition’, emancipated authors (all of us) get involved in self-actualisation through recognition by others – through their likes, comments, shares and other forms of automated and accelerated social exchange. Compared with offline social practices, social media have powerfully facilitated everyone’s socialisation. 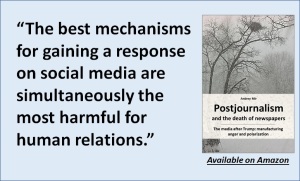 But this service comes with a disservice: the increase in the speed of socialisation has a price. The best mechanisms for gaining a response on social media are simultaneously the most harmful for human relations. A better response comes to those efforts, deliberate or subconscious, that aim at attracting reaction.

Everything aligned with the background noise is invisible, so the ‘struggle for recognition’ incentivises oddity. The push for oddity, when taken to its extreme, becomes the push for extremity. Extremes have the highest potential for provoking reactive engagement.

The main value of social networks is tied to their biggest harm. The same features that provide an amazing service of self-actualisation – rapid responsiveness, engagement, virality – simultaneously propel the extremisation of expression.

Polarisation in the news media

<…> Advertising systematically forced the news media to embellish and depoliticise their picture of the world, therefore ‘manufacturing consent’ in the masses regarding the policies of the elites. The predominantly ad-funded media business model just marginalised and drove out of the market outlets with content unsuitable for advertising.

Since the rise of social media, both ad money and audiences have fled to better platforms. “The marriage of capitalism and journalism is over”, stated Robert McChesney.[2] But ad money has run faster. Circa 2014, and simultaneously around the world, a seismic overturn in the media industry happened: ad revenue plummeted below the level of reader revenue in the news media business model.[3] The media started being dependent on readers’, not advertisers’, money.

Not only do the news media have to address ‘pressing social issues’, they must also support and amplify readers’ irritation and frustration with those issues. The more concerned people become, the more likely they are to donate. In order to be successful, the media should ideally not just exaggerate but also induce the public’s concerns.

There is no evil plot, nor ‘liberal bias’, nor ‘right-wing conspiracy’ behind this. These are simply the environmental settings of a media industry that has lost its ad revenue and news business to the internet.

Is there a cure for a polarisation when it’s a determinant of the environment?

A search for solutions that might potentially reduce polarisation can be led in two directions:

The first step to finding a cure is recognising the disease. Media education starts with the awareness of the natural ‘distorting’ forces of the media environment. When media are an environment, not just a tool, and a fully immersive environment, such as the digital one, media education must be anti-environmental. As Marshall McLuhan wrote: “Is not the essence of education civil defence against media fallout?”[4]

The anti-environmental character of media education means exposing the settings of the environment and attributing them to media, not to humans. What we are dealing with in the digital reality is not people. These are people’s proxies that have been processed by media. Purified confrontation, animosity and rage are media conditions, not human conditions. Human nature is more complex than that. Confrontation, animosity and rage are extracted and refined from human behaviour by the media platforms for better performance.

By exposing the fact that animosity and polarisation are not solely human features but media-environmental effects, media education can rehumanise people: it can reverse the dehumanising effect of polarisation.

As for media engineering, the question is whether it is feasible to reengineer the fundamental settings of media in the economy of attention. Is it even possible to rearrange the economic and behavioural rewards for media use in such a manner that they would incentivise people’s engagement based on, if not consensus, then at the very least tolerance, instead of polarisation? This is the million-dollar question, literally; though, considering the capitalisation of Google and Facebook, it is more like a billion-dollar question.

The fact that the expression of extremes on social media is encouraged in the pursuit of response is only a part of the problem. This is not even the main problem of digital media polarisation. The core problem is that the middle ground is disincentivised.

Perhaps one of the more fruitful avenues for depolarisation could be to attempt to reinforce the centre. If one side of the spectrum thinks the past represents nothing but shame, and the other side thinks the past represents nothing but glory, the only way to mitigate polarisation is not to bring those sides together but to empower the voice of the centre. It is the centre who might assume, for example, that the past is much more complex than shame or glory, both of which are, actually, political tools of the present rather than conditions of the past.

Anti-polarising efforts may relate to silencing the extremes and vocalising the centre. How can the centre become better responded to, better liked, shared, more popular and more profitable at the level of the very design of social media and the news media? The answer to this question, if ever found, is surely worthy of the Nobel Peace Prize.

Ultimately, “How to get rid of polarisation?” might be the wrong question. The correct question is more likely to be: “How are we going to live with it?”

Published in: Andrey Mir. (2021). How both old and new media polarise society for profit (or survival). Why polarisation is a media effect and what we can do about it. IPPR Progressive Review, Spring 2021, 1-10. Institute of Public Policy Research.

[3] Miroshnichenko A (2020) Postjournalism and the Death of Newspapers: The media after Trump: Manufacturing anger and polarization, A Miroshnichenko. https://www.amazon.com/dp/B08GWWXDG7

Like Loading...
‹ The eternal failure of selling news
The hamsterization of journalism and cannibalism of news teasers ›