Review of Andrey Mir’s “Postjournalism and the Death of Newspapers”

The full title of Postjournalism and the Death of Newspapers. The Media after Trump: Manufacturing Anger and Polarization by Andrey Mir says it all: the delivery of news on Twitter and social media to an increasing majority of people has replaced the attempt to disseminate facts and truth on traditional news media, with the new goal of massive engagement via likes, retweets, and shares, with the result that an informed public, however imperfectly constructed, is being shoved aside by a polarized populace seething with anger. I would add: this is also the best book on media theory and assessment written in forty years.

Mir brings to bear the media insight of Marshall McLuhan, the political savvy of Walter Lippmann, the radical economy of Edward Herman and Noam Chomsky, and much more in his detailed and probing analysis. The 20th century began with newspapers selling news to readers and concluded with newspapers and radio and TV selling news to advertisers. Both systems, though flawed, and for different reasons, were committed to making their utmost efforts to report the truth. Readers wouldn’t tolerate too many falsities in their newspapers, and advertisers did not want to be associated with them, either. 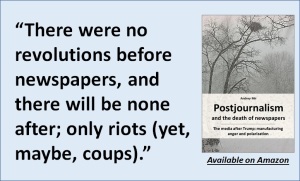 All of that changed with the advent of social media, cheered at first, by many, including me, as uncorking the voice of the people, and pushing the haughty gatekeepers aka editors out of the way. It was a case of Dylan’s “Don’t stand in the doorway, don’t block up the halls.” Occupy Wall Street and the Arab Spring were seen by me and many others as early triumphs of these unshacklings of information. I still feel that way about social media and their potentials. But Mir convincingly tags and explains the darkside of this same liberation of news.

On Twitter, readers pay nothing for the news other than their time. Viewers pay nothing for broadcast news, either, but the advertisers do. Ads appear on social media, too, but they’re barely distinguishable from the myriad bits of news, which all too often are no longer news, but opinion. And since the posters of these news opinions seek validation via likes, shares, and retweets, a kind of natural selection winnows out the more moderate opinions. The more controversial and extreme the fact-opinion, the more likely it is to be retweeted.

This tide of polarization engulfs the traditional media, too. Mir explains, “Centrist experts can appear in the media, but they are not those who generate buzz, virality, and spin-off in the polarized media environment aimed at frustrating and engaging” (p. 316). When was the last time you saw a Trumpist or even a moderate on MSNBC or CNN? Once in a blue moon, at most. As a viewer of these two cable news stations, no more immune than any other human to the polarization and anger of our age, I can attest to being annoyed and even angry when a Trumpist or even a moderate appears unchallenged by aggressive hosts on these stations. I don’t watch much of Fox News, but from what I’ve seen, the same and worse is true in reverse: progressives unchallenged or not by hosts are virtually nonexistent over there. Moreover, some hosts on Fox have no problem spouting outright lies like Trump won the 2020 election as fact.

Keep in mind that Mir made all of these observations about the intensification of angers in this, our socially mediated age, prior to Trump’s mob storming the U. S. Capitol on January 6 of this year. I just saw, today, the second day of Trump’s second impeachment trial in the U. S. Senate, a video that captured the sick fascistic depravity of that mob, and how close they came to killing the Vice President of the United States, the Speaker of the House, and who knows how many Senators and Representatives — how close that Hitlerian, Trumpist mob, who pretend to be Americans, came to dealing out mass death, were it not for the bravery and savvy of the Capitol and District of Columbia police who were so vastly outnumbered. They were outnumbered by the physical manifestation of the online mobs that Mir describes in Postjournalsm — physical mobs that sought to cancel democracy by cancelling the lives of its elected representatives.

I remain an optimist, and, like John Milton, a believer in human rationality, and its capacity to stand up to illogical and inchoate emotion. But it failed before, in Nazi Germany, and it almost failed here in the United States at the end of Trump’s term in office.

If you’d like to learn more about how this state of the country and world came to be, read Mir’s book. You’ll likely learn more from Postjournalism — as chocked full of extensive research as it with prescient lines like “There were no revolutions before newspapers, and there will be none after; only riots (yet, maybe, coups)”(p. 451) — than from the past dozen books you’ve read or will read on the subject.

Paul Levinson’s author page on Amazon.
Including:
Digital McLuhan: A Guide to the Information Millennium
McLuhan in an Age of Social Media
Fake News in Real Context
Human Replay: A Theory of the Evolution of Media
Fake News: Understanding Media and Misinformation in the Digital Age (Information Policy)

Like Loading...
‹ Rage on social media: signaling intensities instead of feelings
The eternal failure of selling news ›