Trees die twice: the beautiful end of the book era

A library in Picton organized the DiscARTed Art show

It was a cozy evening event organized by a local library in a small town. Anyone who wished to participate had been encouraged to pick up discarded books from one of six Prince Edward County libraries and produce something new from them. And voilà! Here is a sculpture-like dress made from glued book pages. There is a table lamp where a book is a pedestal upon which the two-sided picture shade emits the soft light. Next to them, a small beautiful sailboat is carved from the top end of a volume whose bottom end remains the intact half of the book. Yes, the remains of the book. Nobody reads this book anymore but it can still induce a romantic image. For the last time. 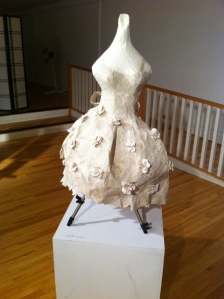 At the end of October, the Prince Edward County Library and Archives together with Books & Company hosted the “2014 DiscARTed Art show – creations from discarded books” in Picton, Ontario. It was the 3rd annual show, so the tradition is already well established. The purpose of the event was to fundraise for the library and also for an upcoming local authors festival. Visitors could buy what they liked. Profits weren’t the main result – fun was.

There is an uncanny feeling about the use of a book for something other than reading. Manufacturing something from books means first destroying a book. For me, who grew up in the Soviet Union, it is still sensitive – even though I have been writing a lot about the impending death of newspapers. It has been only about 80 years since the time when, in the blink of an eye, historically speaking, the rate of literacy in Russia was boosted from 30% to 90% thanks to the Bolshevik’s mega-program “LikBez” (“liquidation of illiteracy”). Having the memory of preliterate times, people still cling to the significance of book reading. “Don’t damage the book!” we were taught in school.

And now books are becoming obsolete. There is no more sanctity in the book; it is just a carrier of information, and by far not the best one.

Despite my personal background, I am not alone, of course, in seeing the book as something special in its materiality. As soon I started asking Christine Renaud, the librarian and co-organizer of the DiscARTed Art show, how she felt about “reprocessing” the books (which means actually destroying them), she expressed exactly the same emotions as I had. Of course, she is biased toward books because of, this time, her background as a librarian. I think everyone who had come of age by the recent culmination of the Gutenberg era, and now its current collapse, may experience the same sense of loss. But what is to be done? Otherwise, Christine says, discarded books would get recycled, which means, again, destruction, but an inglorious one. Thus, the idea was to give chosen books a new life… through a beautiful death, I would add.

Of course, someone from the printing era – Typographic Man – will try to give an old book a new reading in this situation. I know such a one. Andrew McLuhan, a Picton resident, participated in the DiscARTed Art show. He certainly does share my feelings about destroying the books. That is why he felt his job was to safeguard the destiny of the books even while reprocessing them. Andrew scrutinized some books, then took a sharp knife and physically cut out lines and words in such a way that created a form of poetry whose lines look randomly combined, but thanks to Andrew’s will, are filled up with a new meaning. Next, this new poetry from the old text was placed atop of a picture (from another discarded book), so that the picture and poetry play together. It is a completely new reading of old pages. And it is still about pages, still about reading, but it is a new piece of art, at the same time. I now own a couple. 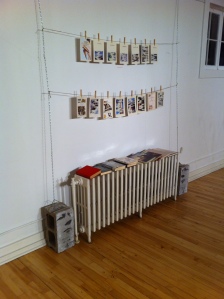 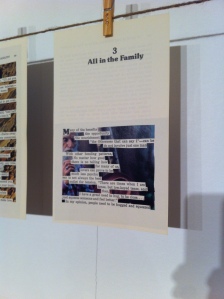 Describing his idea, Andrew refers to the book of his grandfather Marshall McLuhan and his father Eric McLuhan: “It works into the Laws of Media” he says, “media become obsolesced and retrieved as an art form.” Following him, I would retrieve another idea of Marshall McLuhan’s: in those funny art pieces made by his grandson for library fundraising, we see literally how older media turns into the content of newer media. 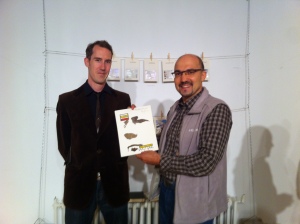 As humankind plays with all its media, so does Andrew McLuhan; and not only with discARTed books. Half of his day time, Andrew works with his father to maintain and develop the legacy of Marshall McLuhan. The rest of the time he runs his small furniture business, upholstering old furniture. Things are going pretty well; in the age of Ikea, people value old memorable things more and more. But none of his clients knows the secret of his that I discovered by accident while discussing the fate of printed text. On the underside of the upholstery, he sometimes writes some of his poetry. Probably, nobody has read it yet, but I don’t believe that a poet or a writer can create something without the figure of the reader, even if only an imaginary one. “Sure,” answers Andrew ironically, “somebody will read it. If only the next upholsterer.”

So, to use or to read? That is the question.