“In 1988, Ontario became the first educational jurisdiction in the world to mandate media literacy as part of the English curriculum”, reports the “Media Education: Make It Happen!” Program. In 1988 – that’s impressive. For so many years, this program has been building up its own tradition and its own methodology of teaching. But there is also the other side of the coin: there is a risk of becoming outdated.

The methodological materials of the Ontario Media Literacy Program contain an essential concept for deconstructing how the media deliver their messages. It is called the Media Studies Triangle and represents three basic components of media: Text, Audience, and Production. It is an efficient tool, which has been reproduced in many methodological guides for teachers (for example: AMS Grade 6 Media Literacy). 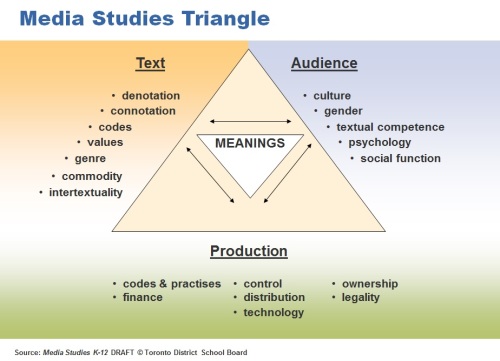 My guess is this is because the text was the main – and habitual – carrier of meaning at the time when the program was laid out. A deeper explanation may go back to the word literacy itself which has turned out to be a sort of a semantic trap for understanding media education. The concept of literacy literally (pardon the pun) means the ability to read and to write a linear sequence of letters (pardon, again). No wonder those people using the term literacy tend to be text-biased.

Meanwhile, what is the real role of the linear sequence of letters in today’s media and, especially, in emerging media?

Today, what has to be in the text’s place in the Media Studies Triangle is not text. No longer. At least, no long text. And soon, not text at all. So what instead?

The main media my son consumes is Minecraft. He can spend tons of time there until we drag him back. I am not sure about text but words are still represented in the game. These words even help him to learn English, which is not our first language. He also learned some chemistry, physics, biology, geology, and zombology from Minecraft, though all that knowledge is mostly false, unfortunately. But this experience gives him a taste for organizing the world. He definitely perceives the game space as an environment.

Also interesting is that Minecraft doesn’t depend on a specific gadget. It is a game ecosystem that is available on many different devices. So media now is not even about a channel or device. It is about a space of time spending and attention-grabbing. You hardly find the room for good old linear text in this Galaxy.

The medium for Minecraft as media is not a device, nor is it text. It is the interface.

Let us focus now on the old and oldest media, which are press, TV, radio, and the Web. Even in newspapers, proportions of texts and other visual components are changing. The significance of infographics which allows readers to catch meaning fast (in turn, allowing newspapers to catch readers) has been increasing. Readers have become viewers. Let us take a look at the changes in radio in the proportions of music, easy chats, mid-weight talks, and hard narratives. Let us see how the length of the utterance has been changing on TV… And we may skip the Internet, since there is no need to discuss the survival of long and linear text there.

The long linear text was the Grail of European culture. Education was based on forcing students to read long texts. It required diligence from students. Diligence was the code of written culture. Now the main code of culture is being switched from diligence to fast’n’fun. This shift is going on right now.

Let’s take a look at the future in 5-10 years. What will be at the place of “text” in media? Or, more precisely, how will meaning be expressed and communicated? From solely visual and solely auditory channels of communication, media has already been moving to the mixed interaction between humans and the media world. The mix of auditory and visual information on TV is not the final point of media development. Today 4D, and 5D movie theatres (I saw… and felt a 7D movie!) offers an almost full package of sensorium agitation. “Spectators” are being shaken, touched, blown with hot or flavoured air, poured on or sprayed with water, and moved down and up. Artfully combined and synchronized, these impacts together create the effect of being present in an imaginary world. I have experienced that, and it is cool when it is well synchronized. The effect of presence or co-sensation – isn’t this what art, or literature, or movies, or media seek to achieve?

However, this is just the Stone Age of what will be the future technologies of immersing the whole human sensorium into a new world, but it is on its way.

Today, it is technically possible to transfer and induce tactile sensation or smell via computer. That is what McLuhan ingeniously foresaw in saying that the electric media returns humans from visual (alphabetically based) space back to audile-tactile space. McLuhan wrote that “tactility is the interplay of the senses, rather than the isolated contact of skin and object.” (Marshall McLuhan. Understanding Media: Extensions of Man. 1964.) To develop McLuhan’s thought, I would say that tactility requires the synchronization of all the other senses; otherwise, you would not be able to effectively manipulate objects in the real world. Therefore, tactility can represent the whole sensorium.

Media targeting of the whole sensorium is an important point. The electric and now digital media evidence this global trend. The trend has always existed in media but has only recently appeared explicitly due to the acceleration of the media technologies. Media evolution leads to our gradual resettling from the physical world to the “best” one, which is the virtual one. Along the way, media evolution condemns us to be entirely immersed in this new environment with all our five senses, just as we have been existing in the real world until now.

However, 3D, 7D – or speaking precisely, 5-Senses simulation – is just an exercise in shifting human perception from the real world to an artificial one. And this exercise is actually a dead-end; it will not transfer us to the virtual realm. 5S simulation still uses the physical irritation of the nerve endings (though the signals are transferred digitally). It is still as biological as in the real world. The time is coming to stimulate nerve beginnings, not endings. What really enables people’s immersion into the new environment is games and social media.

Games don’t require diligence, they just take it. (Remember McLuhan again, “Man works when he is partially involved. When he is totally involved he is at play or leisure.” – Marshall McLuhan. The Agenbite of Outwit. 1998) Games are able to capture our sensorium completely and even recode it. For example, a gamer in flying 3D shooters finally identifies themselves with the flying unit and loses the sense of gravity after several hours inside the induced reality. Should sensory manipulation be the subject of media literacy if games are becoming the leading media? (The number of gamers in the world overcomes 1 billion; it is a half of the digital population, and the most active half.) Again, where is the place for text there?

Social media is another fast-emerging media. While games attract their prey via the digital tickling and expanding of our sensorium, social media attract by giving us the opportunity for accelerated socialization. Social media ultimately unleash the 6th sense, which is purely human, not biological – the sense of sociality, the thirst for response (that is why “humanization” of the sensorium looks like the destination point of media evolution, at least in its human phase).

Text may still matter there along with pictures and graphics, but what is really important in social media is users’ behaviour in a certain environment. No matter what people use as the medium in social media, the point is how they interact with the ecosystem.

No need to deny text as a medium so far. But text biased media education can and will inevitably miss some essential details.

For example, in the “Media Education: Make It Happen!” program there is a good case study that applies the Media Studies Triangle (See the Workshop presentation of “Media Education: Make It Happen!” program, slide 34). Considering a banner as a medium, the program suggests paying attention to the font of the letters if it represents some certain stereotype. Good point! 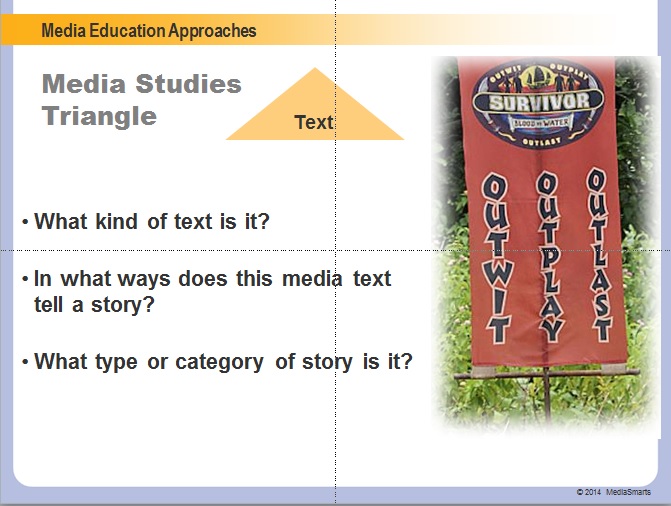 But, probably, it is worth paying no less attention to the colour and the very construction of the banner itself, as well as to where and when it is placed. This is an environmental approach to media literacy.

Deconstruction of the text simply follows the hermeneutic, literary tradition, which was essential for the European culture based on interpretations of the Greeks’ texts and the Bible. But half a century ago Innis and McLuhan argued that media creates the ecosystem. After that, the textual approach to media literacy could be overcome and included in the environmental approach.

All these issues seem to relate to the nature of the medium, not to the Audience or Production in terms of the Media Studies Triangle. And this nature has little to do with text. As we consider the Media Studies Triangle a good methodological tool for media education, it is probably worth opening a discussion on what should be at the place of “text” to facilitate teaching. I would suggest the term “interface”.

Teaching how to understand texts is important, too. 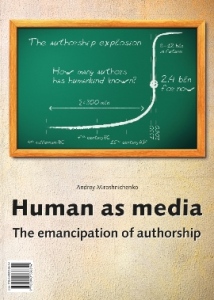